I sat down this morning to learn about the Entity Component Model and how I could go about implementing it in my Real World Modelling project. I expected it to be some big, unwieldy beast of a pattern; however, a few hours later I had a functioning spike written though c++. The program consists of two Entities (the first has both Position and Velocity components, whereas the second one has only Position) and a ComponentSystem (a MovementSystem to be exact). The MovementSystem implements a pure virtual tick() function that finds all Entities with both Position and Velocity elements, and simply adds the position onto the velocity; it ignores all Entities that don’t have both of these components.

What is an Entity though?
An Entity is an class that has a container of Components and a couple of public functions for adding/removing/fetching them. It doesn’t actually do anything on its own and it has no derived classes.

That’s where the Components come in!
The Component base class also does nothing by itself. It has only one function, getType(), which returns the type of the component. Each derived Component class implements some standalone functionality. For example, a Position component holds an x and y value, as well as a few methods for manipulating them.

While nothing derives from Entity, a whole load of stuff is going to derive from Component. 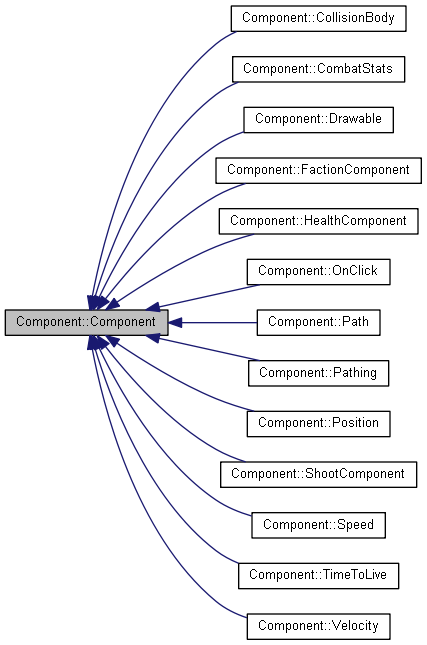 That’s all there is to it. It’s a fairly simple pattern once you get your head around it, although it feels counter intuitive to step back from deep inheritance trees and just use a single class.

I’m no expert on this topic, so should another article contradict anything here, it’d probably be best to follow the other article. Nevertheless, I hope this becomes of use to someone.